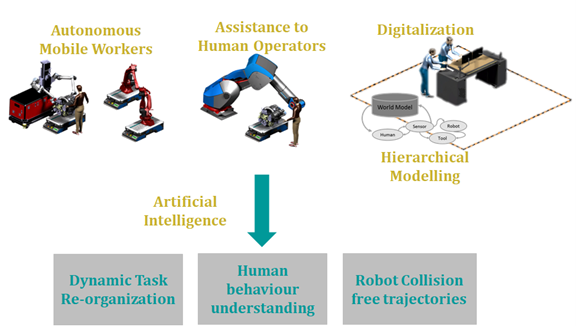 ODIN encompasses the concept of modular and reconfigurable production and will work towards demonstrating that novel robot-based production systems are not only technically feasible, but also efficient and sustainable for immediate introduction at the shopfloor. ODIN aims to introduce cooperating resources including autonomous mobile robots and high payload collaborative robots, able to collaborate and assist human operators during production. To support this hybrid production paradigm and the autonomy required for enabling the dynamic reconfiguration of the production system it is vital to efficiently organize all production entities and plan their activities by reasoning over the real time shopfloor status.

This need raises the question of how to optimally distribute the production tasks among the available robots and human operators ensuring system’s adaptability to shopfloor and process changes.

To answer this question, LMS will deploy an AI-based Task Planning module for work re-organization which will be integrated in two different industrial scenarios deriving from the white goods and automotive industries. This module will have task planning and dynamic reconfiguration functionalities. Initially, a hierarchical modelling concept will be used in order to represent the different resources such as robots, mobile robots, humans as well as their task execution parameters. The main capability of the Task Planning module will be the allocation of tasks to the various resources according to their availability, production time, cost and other user-defined criteria that will be prioritized according to importance. Taking into account such metrics as well as multiple simulation results, the Task Planning module will be capable of generating alternative scenarios and selecting a close to optimal solution. An additional capability of this module will be the dynamic reconfiguration of the execution in case of any unexpected event occurred in production. In order for this to be achieved, the task planning module will work in tandem and continuously receive input from the digital twin of the selected versatile workspace.

How will the ODIN Task Planning module contribute to the manufacturing industry?

To remain competitive, manufacturers need to be able to gain greater efficiency and agility in their operations. The work of LMS in ODIN will be focused on deploying the task planning module based on AI functionalities. This module will ingest data deriving from the multiple resources as well as sensors in order to generate realistic task allocations based on the shop floor status. Adopting advanced robotics and AI could boost productivity in many industries, while cutting labour costs. The task planning module will allow European manufacturers to bring more automation and thus improve their competitiveness, enabling them to deliver products of standardized quality, at higher production rates and maintaining costs at levels that will allow them to keep producing in Europe. ODIN will develop a scalable prototype of the task planning module from small laboratory to an actual deployment of a scaled-up pilot at the premises of three end users of different sectors of manufacturing (automotive, aeronautics, white goods).