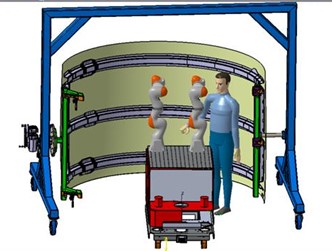 Vacuum cleaning domestic robots became very popular in our homes. One of the key reasons of their success is that they are extremely easy to use, but they can only do one task: cleaning. Industrial robots are conquering our factories, they are extremely versatile but high expertise is required to program and deploy them.

Is it possible to develop a multipurpose tool/robot that could be deployed by common field operators to automate many of the factory processes? Can we create an easy to use swiss army knife for automation?

To answer these and other questions the ODIN project organized several use cases (see http://www.odin-h2020.eu/use_cases). One of them is focused in the Aeronautics field and a mobile dual-arm robot will be used as a multipurpose tool to automate specific drilling, transportation, and inspection operations. With the goal of field operators to be able to easily automate new tasks, a system will be developed that we named on-site interactive skill programming.

On-site interactive skill programming as the name indicates pursues to make all the robot programming on the spot where the automation must be deployed. The robot has a collection of previously learned skills and the selection of the set of skills to be concatenated and the setup of the concrete parameters for them is done in smooth cooperation between the robot and the operator using rich visual, sound based and tactile interaction.

To illustrate with an example, we will use the operation of drilling with template. A mobile robot with an arm would navigate to the workplace, would grasp the drilling tool and would perform the required drillings. The robot would require artificial vision to detect the spot where the drilling tool is located and to detect the drilling template. All would be encapsulated in a drilling skill and both the robot and the operator would cooperate to setup the parameters needed to perform specific drillings on a specific location of the aeronautic part. For example, a sample of a possible interaction sequence to program the task could be:

In some configurations, the operator will tell the robot to store the trajectory exactly as he/she performs it, in others will ask to optimize the taught trajectories. And they continue the interaction until the drilling process for the specific part is programmed.

In conclusion, on-site interactive skill programming pursues to help deploy versatile easy to program robots and consists of two steps. First the robot is populated with pre-programmed or learned generic skills normally developed by experts. Then, operators, in cooperation with the robot, can experiment combining and parameterizing skills at their will until the robot learns to automate a new process.